The Simple Truth: There Are 3 Types Of Income 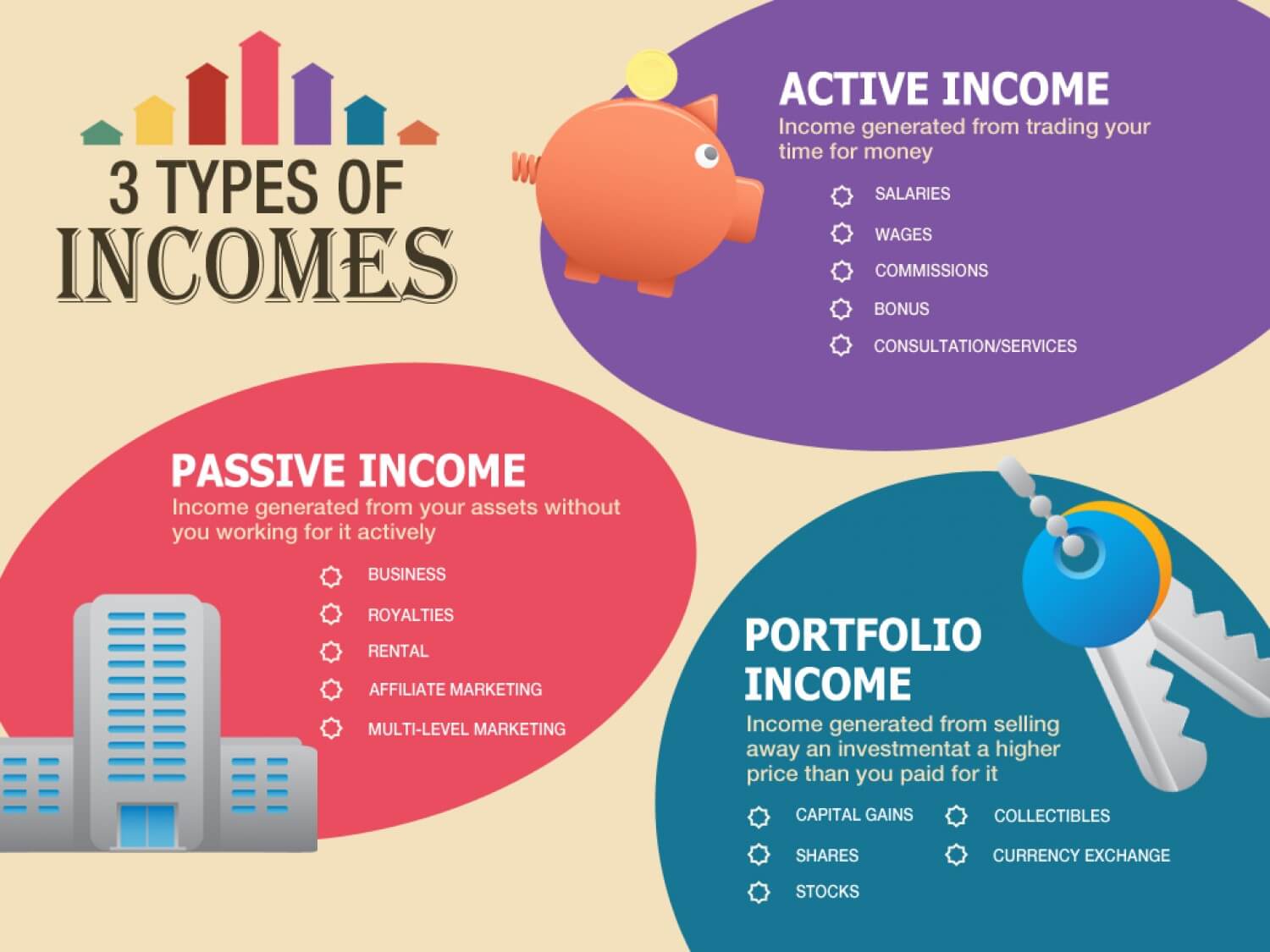 I am very confident this post will give you many Eureka moments because it talks about things most people aren’t aware of.

Also, if you really pay attention, the content of this email will keep you up at night for at least the next 2-3 days (in a good way of course).

See, if you are in the middle class, the only type of income you might have heard of is “salary” or “commissions” or “part time wages”.

You wouldn’t have heard of people making money through dividends, royalties, rent etc.

This is because all these “other” income sources are not at all related to the middle class.

In fact, I would go so far as to say that only 1-5% of the world’s population effectively earns income through dividends, royalties and rent.

But let’s back up for a minute.

Before we proceed further, I have to mention another important point: Not all incomes are equal.

There are 3 types of income that you can earn:

Let’s go through some examples:

Sam earns $100,000 annually as a Senior Manager in a Utilities company. While the position is prestigious and while Sam is thrilled to be working there, Sam is in fact earning “earned income” which is taxed at a much higher rate.

Because most of Sam’s family and friends are also in the working class, he doesn’t realize that there are more tax-efficient ways to make money.

Depending on where Sam is in the world, he would be paying as much as 40% tax on that income, resulting in a grand total of $60,000 annually.

At the end of every year, Sam always asks his wife “Honey, where did all our money go?”

A good chunk of Sam’s money went to the government, which uses it to build infrastructure, pay off debts, support healthcare, help the needy and also to fund wars.

And while many of these causes are commendable, Sam really does not have any control over how much he pays in taxes and where the money goes.

Needless to say, truly wealthy people do not make a lot of money from “earned income”.

Kylie is a married woman with a decent salary.

She is a senior secretary at a mainstream marketing company which employs 600 people worldwide.

While Kylie was ecstatic with making $5,000, she doesn’t realize a couple of things:

While sometimes selling an asset for a profit can make sense, financially intelligent people do not do this frequently.

Steve is a 33 year old software developer at a medium sized company in Los Angeles.

He is a financially astute guy.

He understands how money works.

He hates it when he has to park money and get no compensation in return and for that reason isn’t thrilled about playing the capital gains game.

He chose CU because this company has had a record of paying higher dividends every single year for the last 42 years.

He was also able to buy the shares at a bargain price because stockholders of CU were unduly panicking and were selling their shares.

But since CU also increased its dividend every year by 5-6%, Steve was making more in dividends every subsequent year.

The best part is that Steve kept making passive income because he was getting paid to invest properly and he did not have to sell (read: sacrifice) the asset (the shares in this case) to make a profit.

This net income from dividend stocks is passive income because:

But that isn’t all.

Steve was also able to buy a duplex in a suburb close to Houston, when the housing market was crashing. Instead of paying the usual price of a standard duplex at $120,000, he was able to pay only $85,000.

As soon as the duplex was in his name, he rented it out to 2 small families.

Using mortgage calculators available for free online (https://tools.td.com/mortgage-payment-calculator/), he calculated his monthly mortgage payment to be around $339.15.

His monthly property taxes were $83.

The repair and maintenance for his duplex was $250 monthly.

His monthly profit from his duplex is therefore:

This net income from the rent of the duplex is passive income because:

In most cases, Steve will pay 2-5% tax on this income, allowing him to keep most of it for himself.

Also, because of inflation, he gets to increase the rents of his duplex by 2-3% annually, pocketing more income in coming years and still paying a very low tax.

Because of his financial acumen, he is able to retire at the age of 43 because his yearly dividend and rental income has increased over the last 10 years to $28,000.

And because he lives a modest lifestyle and since he has other sources of income as well (i.e. consulting part-time), he does not need to work for a living anymore, giving him decades to do whatever he wants, whenever he wants.

Needless to say, if you would like to be financially independent, it would benefit you to act like Steve.

If you read this email closely, you would have realized one central theme here.

Understanding the key differences between earned income, portfolio income and passive income is critical to your financial success.

Remember, all 3 of these income types are “earned” in a totally different manner and are taxed at different rates as well.

So here is Rule #5: Learn to convert active income into passive income as efficiently as possible.

I would suggest re-reading this email many times.

This is because while the concept is easy to understand, internalizing it can take a while.

Once again, you can only become financially independent by doing 2 things:

Steve is able to do both & he reaps the rewards of his creativity and financial acumen.

Thoughts? Suggestions? Feel free to leave your comments below.